During a trip to Pittsburgh in 2009 I visited a church that had been converted into a brewery. The food and beer were quite good. The panoramic was shot handheld in the middle of a very busy and dark space.

History of the Church Brew Works

The following is taken from The Church Brew Works website. Beginning in the late 1950’s, Lawrenceville began undergoing a change – much like the city of Pittsburgh. There was a stop in the growth and a gradual decline in the industrial strength of the area. The mills that provided jobs and revenue in Lawrenceville slowly began closing down. The young, vibrant community was beginning to grow more mature. Just as before, people were moving near their jobs and that meant away from Lawrenceville. The school was shut down approximately 20 years before the parish was disbanded. Throughout the Diocese of Pittsburgh, the number of members in major parishes began to decline.

Due to financial and organizational considerations, the Diocese underwent a major reorganization in 1993. On the 6th of August in 1993, the church was put under an act of suppression by the Bishop of Pittsburgh. The building lay dormant until the construction began in early 1996. It was almost three years to the day when The Church Brew Works reopened the doors of St. John the Baptist for business on the 1st of August in 1996.

As much painstaking effort was taken in the original construction of the building, the same care was used when the renovation of the church and the rectory was undertaken. Attention to detail and the reuse of existing fixtures all help to create a spectacular atmosphere. Original pews were hand cut from 24′ length and hand finished to the present 54″ lengths. These “mini pews” were intentionally designed to be longer than the tables to facilitate ease of entry. The bar has been built from the oak planks salvaged from the shortening of the pews. Check out some photographs.

The reddish orange hue of the flooring comes from the original Douglas Fir floors. These floors were uncovered and meticulously restored after lying dormant under plywood for 50 years. The original eight lanterns in the center bay were removed, repainted gold and reinstalled after complete refurbishment. The lanterns now illuminate the detailing of the ceiling.

The former confessional in the dining room was removed to provide a necessary link to the kitchen. The bricks salvaged from the removal of the confessional have been reused for the pillars on the outdoor sign, the facade on the outdoor ramp and the facade of the new kitchen link. The other confessional remains intact behind the bar and houses “The Church Brew Works” merchandise. Painstaking attention to detail and the integrative reuse of existing fixtures all help to create a spectacular atmosphere to enhance your brewpub experience.

By far, the most breathtaking element is the position of the brew house on the altar. Because the altar was built as a centerpiece of the church, the steel and copper tanks gleaming in the celestial blue backdrop is nothing less than captivating. This extraordinary view is only paralleled by the quality and taste of our beer. 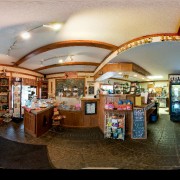 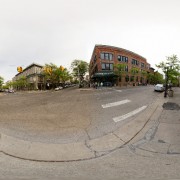 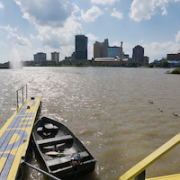